Sewing for Kindergarten: A Blog Tour 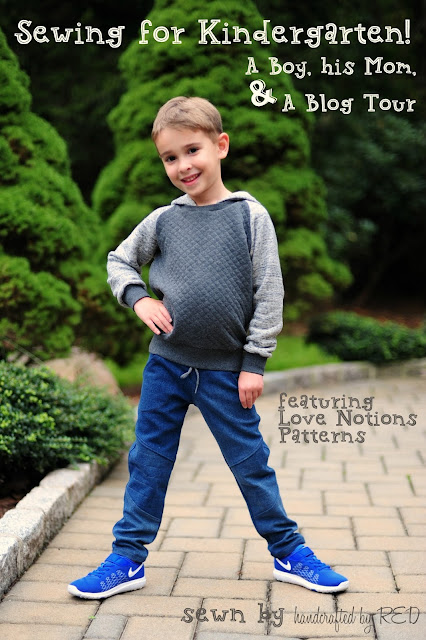 I've been following this series for the past couple of years, and when Jenn asked if I wanted to participate this year I jumped at the chance. This boy has been so excited and proud to start kindergarten, and I knew he'd love to do this blog tour to show off a bit.

Our town has full-day kindergarten, and he only went to preschool part-time (last year was two full days and two half days) but I knew he was ready to make the leap. He had a fantastic teacher last year who really connected with him and encouraged him, and he felt really confident when school finally started this September. He's excited to be in the same school as his sister (she's in second grade), and has been really enjoying all of the activities they do each day. We're extremely lucky and our kids have gym class 3x/week, as well as weekly classes in art, music, library/technology, and STEM. There's a designated playground for kindergarten, so recess is chaotic and fun, and he even admitted to dozing off during rest time after all of the excitement that came before.

I'll admit to being a little nervous - sometimes you just don't know how your kids will react to a big change, you know? He has the same teacher his sister had (and whom we all adore), so that familiarity was helpful. But still, I wasn't expecting him to just march right in on the first day and ask why we were still hanging around! 😂 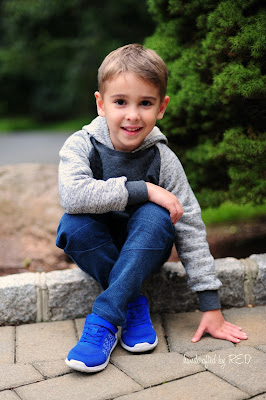 Dressing for kindergarten has been a bit less interesting than it was with his sister, since he really just prefers to grab a pair of shorts and a graphic tee and head down for breakfast. I've made a lot of clothes for him over the years, but lately I find myself making fewer of the staples and more of the "special" but less-worn items - think oxfords and ties, lined zip-front hoodies, etc. He's pretty tough on his clothes but still loves for me to sew for him, so it's been a bit of a balancing act. 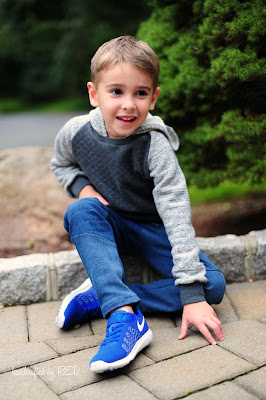 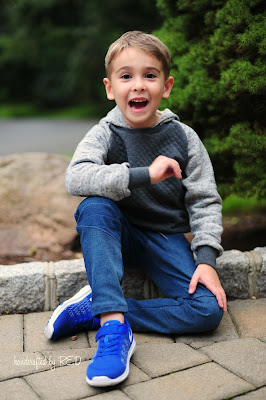 For this photoshoot, he had asked for a new pullover hoodie so I used the Samson sweater pattern from Love Notions and upcycled a men's quilted sweatshirt that I'd found on clearance at Kmart last year. I decided to challenge myself to do a pair of jeans, too, and used the Moto Maxx pattern (also from Love Notions) for that. I've made several pairs of these pants for him, but always from supplex or french terry and not from denim. This denim was also upcycled, and is a thick knit that was formerly a pair of men's plus size pants. The fit of the pants is great in this fabric, and although I'd like to add more detailing to the waistband, I'm happy overall with the outfit and I know he'll get a lot of use out of it. 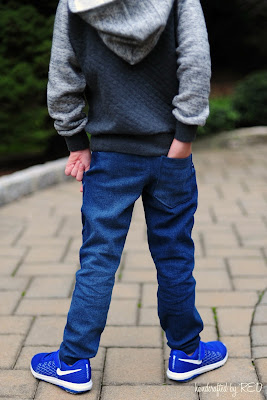 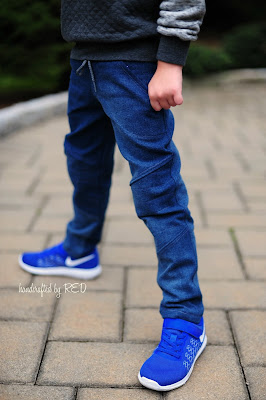 This guy has always been my one-word answer kiddo when it came to questions like "how was your day?" and "what did you do at school?" Until now, that is! He's been such a chatterbox about school and all of the things he did and learned and played with. I love his energy and enthusiasm - and we've all been sleeping well since kindergarten began!

Please make sure to check out the other stops on the tour this week, too - I love seeing all of these newly minted kindergartners in their handmades! <3 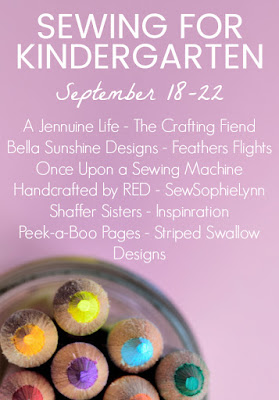 Posted by HandcraftedbyRED at 10:23 PM